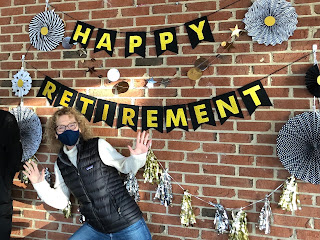 What a year, it started out so well for us. I curated and installed a jewelry show that was an accumulation of a years work from a group of jewelers 6x12=72 Jewelry Challenge. George had a show at the Horace Williams House in Chapel Hill such a success, from that we headed to NYC for a show George was in at the Painting Center. Best trip ever with brother and sister in law, Mary Beth and Leo.Saw a friend I hadn't seen since he was 10 and I was 20. Saw Hamilton on Broadway, saw great art and ate fabulous food and had new explorations in the city. including walking over the Brooklyn bridge and the, new to us, structure called the Vessel which was like being in an Escher print. Then came back to Raleigh to a highly awaited enamel workshop at Sertoma and George's participation in a group exhibit at the North Carolina Museum of Art. And then bam! Every thing came to a halt. And since then the year has been about introspection, reflection, fear and uncertainty. Not to mention isolation. I have spent way too much time on social media, and taken more photos, so many walks, honestly it has not been all bad. Except when you think about all the dire situations for so many people. The election and all the political press was a nightmare. We gave up out tv in July so we missed a lot of it but still could not escape or ignore the unrest in this country. One of my sons moved across country just in time for the fires. Thankfully both of them have stayed employed during all this upheaval. Totally decluttered my house, now that was a feat having lived here for 30 years. Had my 66th birthday and after much thought I decided to retire from my 23 year career at Pullen Art Center.

So here I am ready to move forward into this new year. My focus will be my jewelry as a new self guided and self employed artist. Last day was a little sad. I loved my jobs  I will work part time 5-7 hrs a week in the jewelry studios at pullen and sertoma. I realized if not now, when? I look forward to exploring ideas and mindfully and selectively finding my inner voice and figuring out what to do with it. This just skims my thoughts, mostly I feel like I have really connected with people that are important to me, and have truly been grateful for my life, family and friends. So Happy New Year, here's hoping we are on the mend!

These are photos for you to enjoy they were taken at the Snag conference in Philadelphia 2009, Penland, the ECU Metal Symposium and Emerge gallery. The historic rosette windows are located in france and germany.